BIRMINGHAM, Ala (WIAT) — Update (7/19): The deceased suspect involved in the Wednesday officer-involved shooting downtown has been identified as 35-year-old Roderick Wilson, of Pinson.

Original: Officer Cullen Stafford, a nine-year veteran of the Birmingham Police Department, is still hospitalized at UAB as of Thursday afternoon. His family anticipates that he will be there for at least the next three weeks, if not a month.

CBS 42 spoke with members of Stafford’s family the day after he was shot multiple times by a robbery suspect near the Family Supermarket in downtown Birmingham. They said that Stafford had two surgeries the night that he was admitted and another on Thursday. Friday morning, he will go back into the operating room where surgeons will remove a bullet from his mouth.

“We spoke to his family last night,” said Birmingham Police Chief Patrick Smith. “Great people. They were very concerned about his condition and welfare, and concerned like most parents would be, but the best part and most important part is that they were confident in the fact that he’s doing what he wants to do, where he wants to be–and couldn’t be more proud of him.”

Family told CBS 42 that the suspect was hiding in the bushes and Stafford was caught off-guard. Both family and police said he was wearing a bulletproof vest at the time.

“It’s one of the safety factors that we always use,” said Smith. “It did help in this circumstance, but, you know, he was still struck multiple times in multiple areas.”

In a Facebook post, Kelley Stafford, Cullen’s cousin, wrote that Stafford had been shot in seven times: in the mouth, shoulder, knee, hip, and both feet. Today also happens to be his birthday. 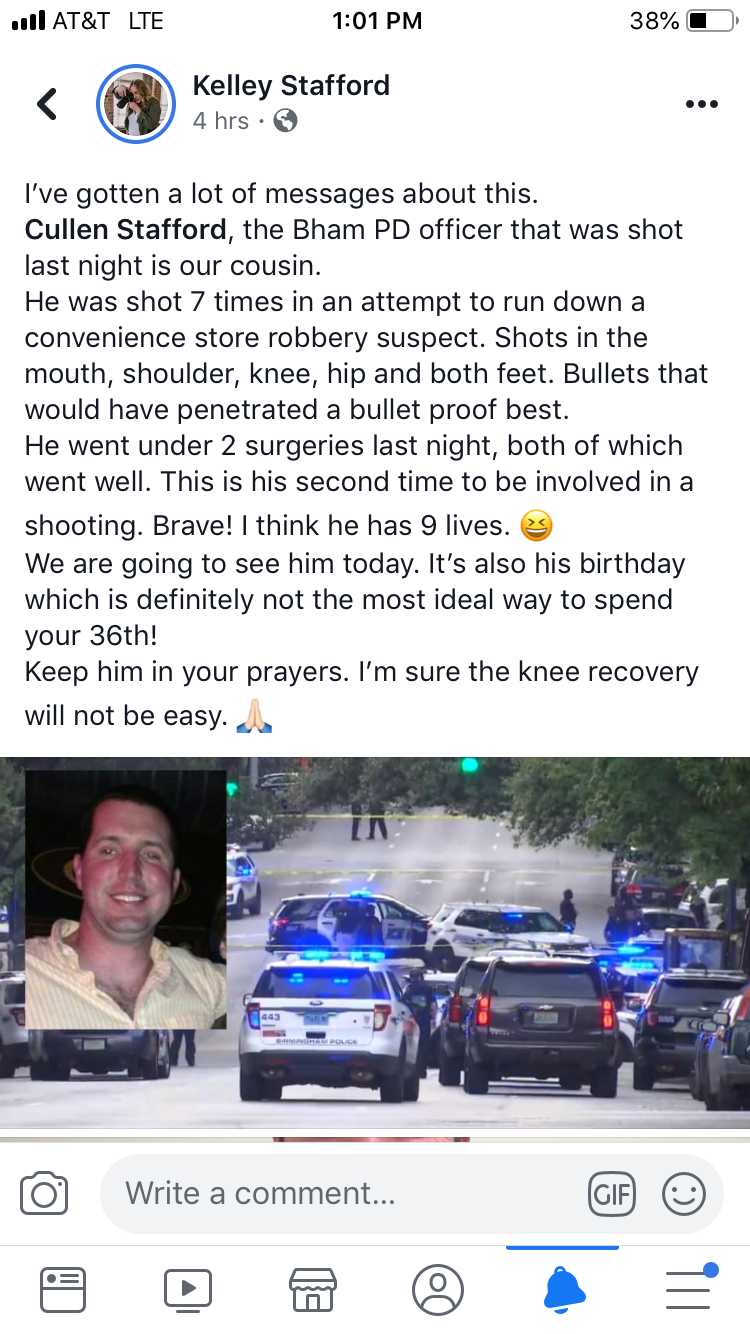 Kelley Stafford explained that Cullen was also one of two officers admitted to the ICU after being t-boned by a suspect in July 2017. That same year, Officer Stafford was named Officer of the Year–the first for the West Precinct at the time. At the time, his commander said that Stafford was a training officer who continuously responded to shotspotter calls.

Chief Smith said that the department continues to be proud of Stafford and all of the responding officers. He said Stafford was currently serving on a city-wide task force to address violent crime.

Family said Stafford, who is 6’10, had to an extra long rod and plate put in his leg following his injuries. “Thankfully, they had one long enough!” said Kelley Stafford. She also told us that the family is in good spirits–just happy that Cullen is alive.

Smith said that the other officer who was injured after falling should be fine. The suspect was killed. Smith said that he has been identified, but that they can’t release anymore information until next of kin has been notified.

After being tormented for 25 days, Annie Peavey called for help. While she admits it sounds silly, Peavey tells WFLA the squirrels have destroyed her furniture and peace of mind.

BIRMINGHAM, Ala. (WIAT) -- A new exhibit in Birmingham is honoring women's suffrage in Alabama.

The exhibit is at the Vulcan Museum and marks the 100th anniversary of the 19th amendment, which gave women the right to vote. It is also a partnership with Girl Scouts of North Central Alabama.

BESSEMER, Ala. (WIAT) -- The Bessemer Police Department is investigating a shooting that happened Friday night

Chief Mike Roper confirmed that at approximately 8:04 p.m., officers responded to the scene of INAOC Interior System on Greenwood Parkway. Arriving on the scene, officers found a person who was shot multiple times with possible life-threatening injuries.

Alabaster teen killed in I-65 S crash was texting while driving, police say